Groovy, as in “feelin’…as in “slow it down, you move too fast” beckoned me off my bicycle this morning and had me reaching for my phone. The big old Hydrangea bush had one last, perfect blossom left in her, face to the warm Summer sun, she posed for me in all her perfect purple glory.

“I know”‘, she whispered strong and sure..”everyone thinks Summer is over..even the other blossoms packed it in for the season, what’s wrong with everyone..don’t they know we have another month?”

I’m with you Groovy, but apparently there are two seasons these days..pool season and Santa season.  Everything else in between is just preparation and worry for them.

Hang tough old girl..we’ve got many gorgeous, warm and colorful days ahead.

When my thirteen year old stumbled into my bedroom last night , rambling that I needed to “put the batteries in the chicken tenders”, I knew it was time.  The Summer gig was up.  His brain is Kentucky Fried- extra crispy.

The kid needs to go back to school…Stat.

I can see the concerned e-mail of the near future…

I was so sorry to hear of your son’s Frontal Lobotomy this past Summer.

We would like to be able to accommodate your son, but the blank staring and drooling

are proving too much of a distraction for the other children..

Yep..all bets are off this year on whether or not the educators will be able to reboot their brains. The kids were left to their own devices this summer for the first time..another milestone.  Two teenage boys holding down the fort while their parents scurried off to their jobs in a vain attempt to keep groceries in the fridge.  No sitters and no more expensive structured activities to keep them supervised and out of the house while Dad and I slogged away..groceries in..groceries out..repeat.

In their defense, I know these limbo years are tough.  Too young to drive, too old for anything that doesn’t require driving.  They want to hang with their friends, go to the movies , get a job.  My oldest did manage to find a job, but the ridiculous child labor laws limit the hours allowed.  Seriously..who better to put to work than a young, healthy body?  Let ’em haul, lift, dig, push and pull…use the entire surface of both hands, not just the thumbs that they text with.

But, all that hard work would interfere with Rip and Van Winkle’s new sleeping patterns…which I strongly suspect is all day long. With no parent home to make noise and nag them into consciousness, they have happily snoozed the summer away , cocooned in air conditioned darkness, each with a Labrador Retriever at the foot of their beds.  I might be jealous..but I would never admit it to them. Instead, I lecture about their wasted youth and the shock that their bodies are about to endure with the return to school next week.  When my son stumbled into my room last night, sleepwalking (a first) and babbling incoherently about needing “batteries for the chicken tenders” ..I took a good long look at him before gently leading him back to his bed…

Dear Lord..we have a lot of work to do.

remind me of long ago ladies

who set their hair and powdered their noses.

Ladies who dressed for lunch

in darling hats and white gloves.

No chips or cracks

how about a second chance?

This lady will fill you with strong coffee,

sipping from you in an old t-shirt.

No guarantees of a chip-free life here

but, I think better than growing old on a shelf 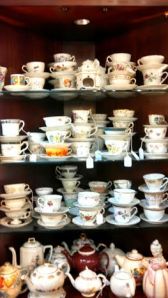 I don’t think I have been this stoked about a major life milestone since I realized my son could blow his own nose.

My teenager is starting his first job, and he’s got the visor to prove it. I mean, what would a first job be without the regulation visor? After a week of studying the company policies and procedures on-line and taking tests on customer service, he marched off to war today, armed with his W4, a work permit, and a gleam in his eye, ready to join  forces with the other Frozen Confectionery Transfer Technicians.

Scooping custard and blending shakes like a boss..and I couldn’t be a prouder Mama.

But, I discovered during this job search process for my fifteen year old, that not all Mamas (and some Papas)  share my enthusiasm for their children to start earning their keep. I was slightly jolted by comments like “geez..give the kid a break”..or ” my genius works so hard in school, he deserves to sleep until dinnertime for three months.”  Huh?

I remember my Dad, on a late 1970’s summer day,calling out the front door to me, where I was playing on the sidewalk with my friends..”Tessie!  I got you a job..you start tonight!”  Three hours later I was standing over the sink in the kitchen of a crab house.  I was thirteen,and it was a filthy, miserable job.  I am pretty sure  every law of sanitation and child welfare were broken..as was my spirit at the futility of staying on top of the ever mounting dishes in my dingy dishwater. The massive crab steam pots, several feet tall, were positioned right next to the sinks..where I sweated and swore at the boys who would throw live crabs into my water just for fun.  At the end of the night, or early morning really, I was paid under the table and thanked the boss for torturing me.  I couldn’t wait to go back.

A long list of jobs followed that first job, a bakery, an ice cream store, a supermarket, a video store,  an amusement park (the best..all I had to do was hide in a hole in the floor of a haunted house and grab the feet of the terrified people running through..perfect for the sleepless college student living at the beach..Zzzzzzz.  I woke up once to a child complaining “this is stupid..this isn’t scary!!”) , a couple of restaurants..all great experiences.

I wish for my son many great experiences as he works through his teenage years. It’s a moment in time that can’t be taken back.

The boy just walked through the door, and all my nervous worry vanished with one look in his beautiful eyes.  They were glowing with energy..he has seen the other side.  He looked six inches taller as he proudly displayed his pocket full of tips.  He’s hooked.